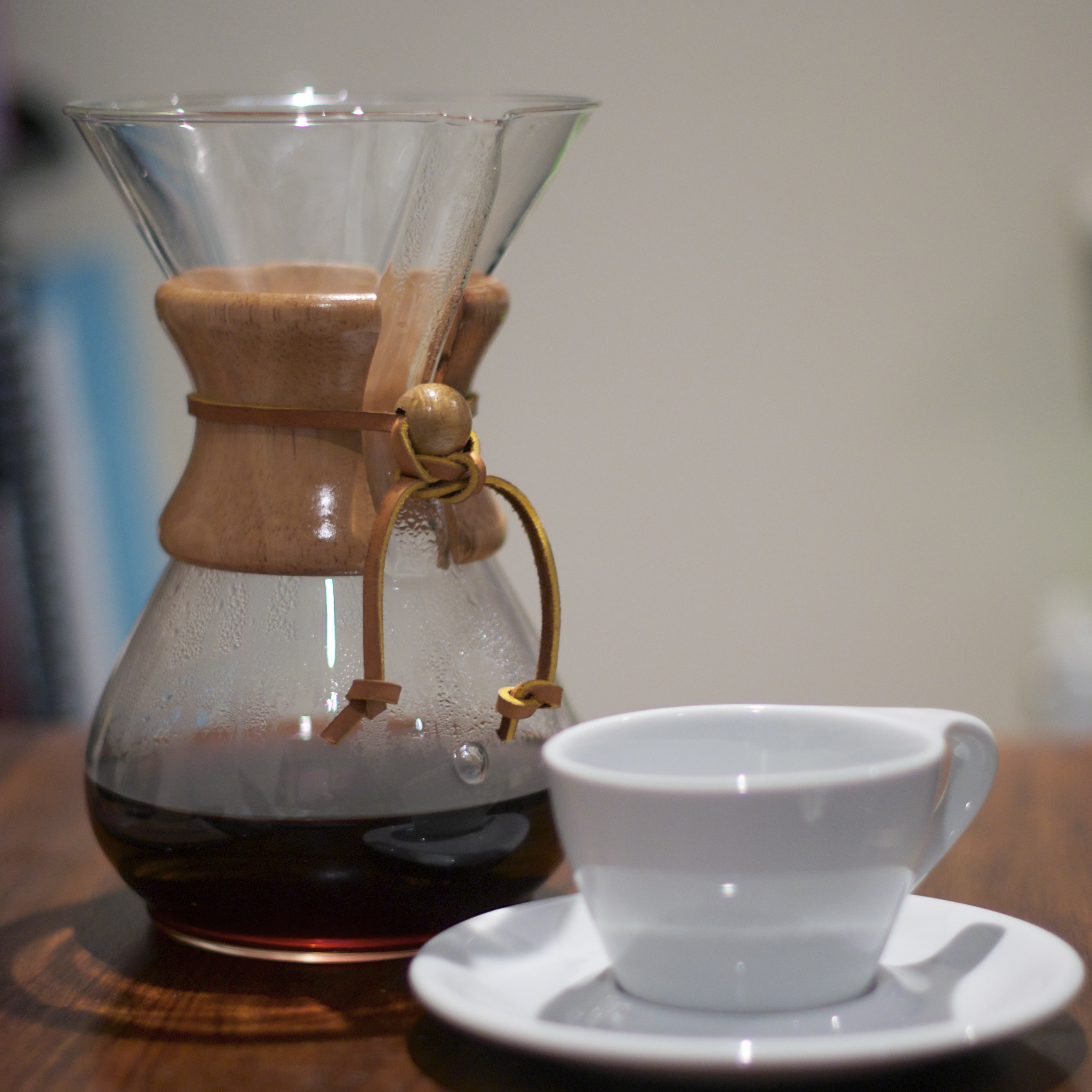 Hot or cold, temperature won’t stop many from obtaining their caffeine fix. Depending on the weather and personal preferences, coffee drinkers at home can brew coffee by one of two ways: hot brew or cold brew.

Many are familiar with hot brew coffee. The equipments used for hot brew are widely recognized, and even iconic: the moka pot, French press, Vietnamese coffee filter, and Chemex, to name a few. These equipments, as with all hot brew techniques, involve pouring hot water over a bed of coffee grounds, at a general proportion of 1 oz. coffee to 8 oz. hot water [1]. (That’s 2 level tablespoons per 1 cup of water, on a more home-friendly scale.) The resulting liquid, coffee, is then separated from the grounds and ideally consumed as soon as possible.

Cold brew demands more patience. In a Mason jar, French press, or Toddy system, coffee grounds are mixed with room temperature water, and then left to sit for hours—anywhere from three to twenty-four hours—before the solids are filtered out. Cold brew recipes often call for a higher coffee to water ratio: 1 part coffee to 4 parts tepid water, which compared to hot brew, is 2 oz. coffee per 8 oz. water (roughly 4 tablespoons per 1 cup water). Once the grounds are removed, what’s left is black coffee concentrate that is thinned with water or milk before it is served.

On the surface, the distinctions between the two methods seem self-explanatory. Hot brew quickly produces fragrant java with bite and acidity, whereas cold brew rewards patience with condensed coffee that is smooth and sweet. To begin to understand the flavor profile differences, it helps to first get acquainted with the coffee grounds.

Coffee grounds contain a hodgepodge of volatile and non-volatile components, such as various oils, acids, and other aromatic molecules [2]. Collectively, these compounds that are found in coffee grounds are referred to as “coffee solubles” and significantly contribute to coffee flavor [2]. Brewing is the process of extracting these components from the grounds, so coffee beverages are technically a solution of coffee solubles and water. Given that coffee grounds are used in both of our brewing methods, the principle variables are temperature and time.

Temperature affects the solubility and volatility of the coffee solubles. Relative to brewing, solubility describes the ability of the solubles to dissolve out of the grounds and into the water; volatility refers to their ability to evaporate into the air. Coffee solubles dissolve best at an optimal temperature of 195-205°F [3]. With more coffee solubles extracted, hot brew coffees are described as more full-bodied and flavorful when compared to cold brew. Moreover, due to increased volatility with higher temperatures, the aromatics are more readily released from coffee, giving rise to that beloved scent of freshly-brewed coffee.

Where cold brew lacks in temperature, it makes up for in time. Coffee solubles have markedly decreased solubility in room temperature water. Increasing the brew time from a few minutes to many hours aims to maximize extraction of the solubles from the grounds. Even over twenty-four hours, not all the coffee solubles will have dissolved; this is why the amount of coffee grounds is doubled, in an effort to make up for the lower extraction rate. In comparison with hot brew, cold brew is sometimes described as tasting “dead” or “flat” due to the lower yield of coffee solubles [3]. Further, decreased volatility prevents aromatics from escaping from coffee as easily, so cold brew is much less perfumed than its hot brew counterpart.

Oxidation and degradation will still occur in cold brew methods, but this happens much more slowly; bitterness and acidity are just about absent in cold brew coffee, especially if it is kept cold. Though, cold brew doesn’t merely taste like hot brew without the bitterness. Fans of the cold brew method have emphasized that cold brews contain a completely different flavor profile that can’t be found with hot brews. Going back to the idea of solubility, not all flavor compounds of coffee solubles are equally soluble. A good majority of the coffee solubles are still able to leach out of the grounds, even in colder water. The compounds that don’t dissolve are the ones often attributed to unfavorable flavors [4]: these stay in the grounds that are subsequently tossed away. Consequently, cold brews take on a much sweeter, floral profile.

To note, brew time does not determine caffeine content, nor does bitterness indicate coffee strength. Caffeine is extracted early in the brewing process, so extending brew time, by either method, would only result in over-extracted coffee [1]. Coffee “strength” is defined as the amount of dissolved coffee solubles per unit of coffee volume [1]. On that train of thought, cold brew certainly produces stronger coffee, given that the brewing process purposely concentrates the coffee solubles. Though, keep in mind that rarely anyone drinks cold brew coffee straight up; many enjoy this smooth drink diluted with milk or water.

Whether you’re an adamant hot brew addict or a die-hard cold brew fanatic, at least coffee drinkers can agree that as long as there’s caffeine, everything’s mellow.

About the author: Alice Phung once had her sights set on an English degree, but eventually switched over to chemistry and hasn’t looked back since. Read more by Alice Phung