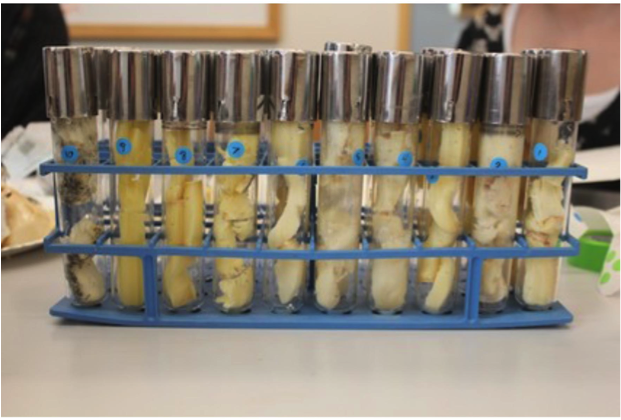 Have you ever been offered a fancy cheese that smelled more like a used gym sock than something edible? Odor artist Sissel Tolaas and researcher Christina Agapakis took this idea and ran with it, with their project Synthetic Aesthetics. The duo used bacteria isolated from human hands, feet, noses, and armpits to generate cheese!

Many cheeses, like beer, wine, and yogurt, are the product of fermentation. Fermentation occurs when microorganisms such as yeast and bacteria convert carbohydrates such as sugar into alcohols, gasses, and acids to generate energy in the absence of oxygen. One common cheese-making type of bacterium, Lactobacillus, breaks down lactose, the primary milk sugar, to lactic acid. This results in lowering the pH of the milk, which as pointed out in a previous post, causes coagulation and solidification into cheese. The work of microorganisms in cheese also results in the creation of many other byproducts that give cheeses their unique smell, texture, and flavor profiles. For example, the bacterium, Propionibacterium freudenreichii, generates carbon dioxide gas in the process of making swiss cheese and causes its characteristic holes [1]. Penicillium roqueforti, which is related to the fungus that helps produce the antibiotic, penicillin, gives blue cheese it’s distinct aroma and look [1].

Microorganisms that use fermentation are found everywhere. Tolaas and Agapakis realized that the human body shared many characteristics with the environments for creating cheese. On a hot day or before a hot date, your armpits may be just as warm and moist as an industrial cheese incubator. Furthermore, cheese-making bacteria like Lactobacillus are common inhabitants in the mammalian gut [1]. With this information, they isolated bacteria from hands, feet, noses, and armpits and added them to whole milk to serve as starter cultures.

Here are the results:

The cheeses displayed a diverse range of bacterial species and odors. Interestingly while some cheeses smelled like “old subway station” or “cat feet,” others exuded the familiar & appetizing flavors of “yogurt,” “feta cheese,” and “light perfume.” Furthermore, some of the bacteria isolated were common to various cheeses. For example, Enterococcus faecalis is a lactic acid bacterium found in raw milk and cheeses, like farmhouse cheddar varieties [2]. Proteus mirabilis is related to Proteus vulgaris, which is responsible for giving surface-ripened cheeses like Limburger and Munster a strong aroma [3].

While these bacterial cultures may not serve as the basis of a new type of artisan cheese, Agapakis notes:

“These cheeses are scientific as well as artistic objects, challenging us to rethink our relationship with our bacteria and with our biotechnology. . . . The cross-over between bacteria found on cheese and on human skin offers a tantalizing hint at how our bacterial symbiotes have come to be part of our culinary cultures.”

In the face of diminishing resources, we are reminded that untapped reservoirs, which may be literally under our noses, might contain hidden treasures that could change the way we generate and produce food.

The Science of Champagne Bubbles