If anyone can cook, then anyone can do science! (Photo credit: Pixar)

“Anyone can cook!” declared Chef Auguste Gusteau in the classic animated film Ratatouille. We’ll go a step further: with a little cooking know-how and access to a kitchen anyone can do science. Each spring the students of the Science & Food undergraduate course prove us right as they research and experiment their way toward apple pie enlightenment.

But you don’t have to be a student in our course to be a savvy kitchen scientist. One of our younger readers, Vincent, recently won his local seventh grade science fair by carefully crafting and conducting his own kitchen experiment. By baking cookies with different temperatures of light (reduced fat) butter, Vincent determined that frozen butter creates a chewier cookie than melted butter. His scientifically proven chewy chocolate chip cookie recipe appears at the end of the article.

A close-up of Vincent’s project. Note the number of cookies baked for each butter condition.

Keys to a successful (kitchen) experiment

A question – Scientific research has to start somewhere, and it almost always starts with a thought-provoking question. Why is the sky blue? Why do apples fall from trees? In this case Vincent wanted to know how the temperature of butter affects the chewiness of chocolate chip cookies.

A carefully controlled experiment – When designing an experiment, it’s crucial to only change one variable, or component, at a time. Vincent was careful to only test one factor—butter temperature—and keep everything else in the experiment constant.

A large enough sample size – Once you’ve perfected your experimental design, repeat, repeat, repeat! Mistakes happen. And even the most thoughtfully executed experiments can go haywire because of factors beyond our control. Ovens have hot spots. Humidity can change the moisture of dough. To help avoid these potential pitfalls, Vincent made eight cookies at each butter temperature and had five different taste-testers rate the cookies.

A thoughtful analysis of the results – At the end of it all, what good is a bunch of data if it doesn’t actually mean anything useful? Based on his taste test, Vincent found that frozen butter produced the chewiest cookies, the exact opposite of his hypothesis! Like a true scientist, Vincent discounted his original hypothesis and offered up some pretty insightful ideas to explain his observations:

“The cookies with melted light butter were the least chewy, almost crunchy. I think this happened because, since there was more moisture in the batter with the melted butter, the cookies spread out more and got flat, exposing more surface area. This caused more water to evaporate quickly.”

A follow-up experiment – The work of a scientist is never done. Answering one question inevitably opens the doors to many more. As for Vincent, he’ll likely be back in the kitchen repeating his experiment with regular butter instead of light butter. “Doing this again,” he wrote in his report, “would not be a problem at all since I love baking and eating cookies!”

Do you experiment in the kitchen?
Write to us at scienceandfooducla (at) gmail (dot) com and tell us about your best kitchen experiment. We’ll feature our favorite feats of kitchen science on the site!

Preheat oven to 350 degrees. Cream butter and both sugars together until well mixed. Add eggs and mix for 2-3 minutes, until the batter is light in color. Add salt, vanilla, baking soda and mix. Add flour and chocolate chips together and mix until combined.

Drop cookie batter by rounded tablespoon onto parchment paper or silpat lined baking sheets and bake for 10 minutes until lightly golden around edges but still soft in the center.

About the author: Liz Roth-Johnson earned her Ph.D. in Molecular Biology at UCLA. If she’s not in the lab, you can usually find her experimenting in the kitchen. 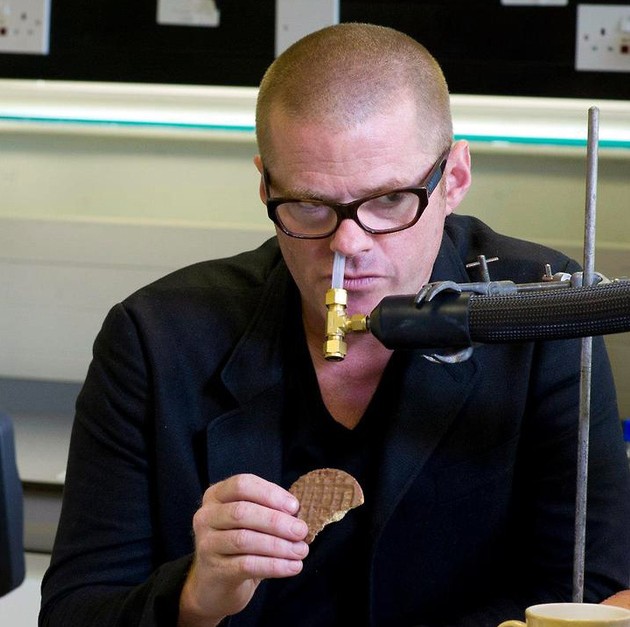 The Science of Champagne Bubbles
4 replies