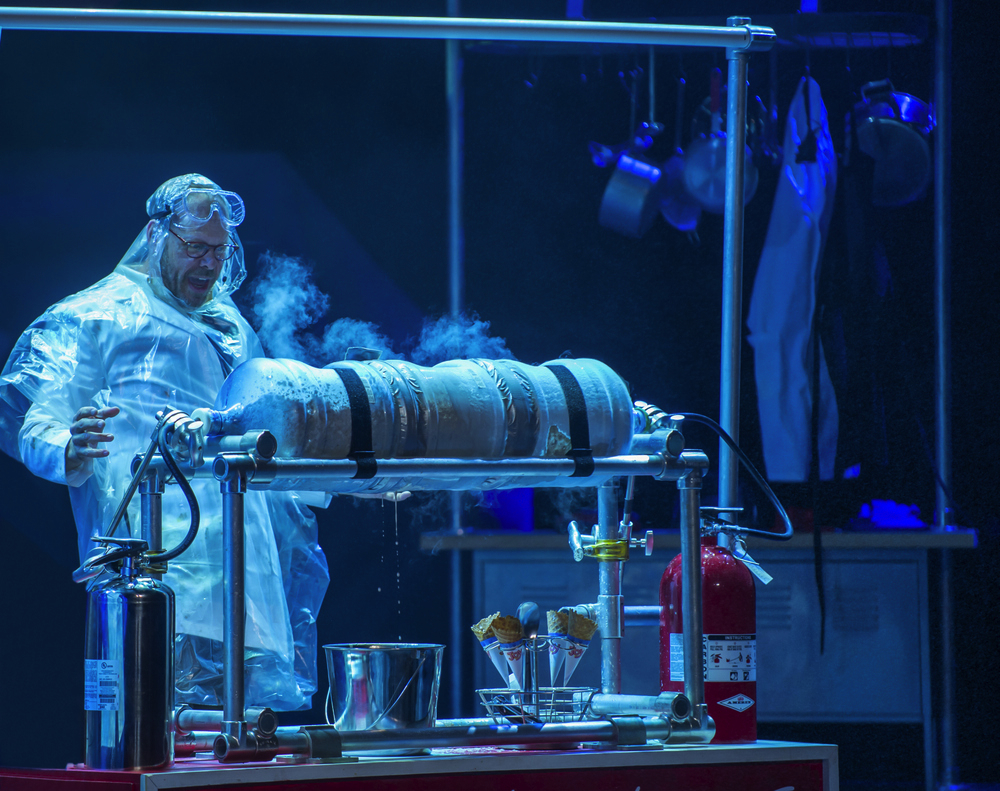 Because you are currently reading a blog about science and food, there is a high probability that you have seen or at least heard of Alton Brown: host of Good Eats and about five other Food Network television shows. There is also a significant probability that you’re a mega-fan of Alton Brown, and if so, that’s something you and I have in common. I have been watching the bespectacled nerd-chef (I say that admiringly) since I was thirteen, and he has largely inspired my food science endeavors. On March 19th I had the absolute pleasure of attending Alton Brown Live! The Incredible Inevitable Tour in Napa, California.

Alton describes the show content as all the things he can’t do on TV, including stand-up comedy, live music, and most excitingly, showing off his insane kitchen inventions. Because even the thought of burning myself on MegaBake terrifies me, we’re going to work through the science behind his colder contraption: Jet Cream.

Making ice cream is usually a simple process. Once you have your cream mixture, it simply needs to be repeatedly cooled and agitated. If we simply froze ice cream base, we’d get huge ice crystals, which aren’t necessarily bad. Dessert shops like Blockheads and Chilly Ribbons sell “Snow Cream,” that results from shaving fine sheets from a block of frozen milk or cream. But if we want ice cream, as Alton clearly does, we must continually add air to the cream and disrupt the crystallization process to make tiny crystals that are barely perceivable on the tongue. That’s why ice cream is smooth and unctuous, while frozen milk is crisp and icy. Whether you’re shaking a container of cream surrounded by ice by hand or using an industrial ice cream machine, the goal is to keep ice crystals small.

Alton’s goal is no different. To make ice cream, all he needs to do is simultaneously freeze and agitate his chocolate cream. His Jet Cream machine is an extravagant way to do a huge batch all at once, and in less than ten seconds. Rather than use ice and salt in a bason like pioneers did, or use liquid nitrogen like the modern gastronome, he uses compressed carbon dioxide via fire extinguisher.

When the fast-flying molecules of carbon dioxide gas are compressed into the extinguisher, they are stored at a very high pressure, typically 825 pounds per square inch. [1] A fire erupts on the stove, or you have a sudden urge for ice cream, so you pull the lever. The pressure is released; the gas flies out, and the nozzle and surrounding air become extremely cold, as tends to happen when a  gas suddenly expands from a high pressure to a low pressure. The change in temperature divided by the change in pressure makes a ratio (∆T/∆P) known as the Joule-Thomson coefficient.[2] The nozzle and surrounding air are chilled because the gas’ pressure change occurs too quickly for significant heat transfer to occur. For many gases at room temperature, as the CO2 in the extinguisher is, the ∆T/∆P ratio is positive, so a pressure drop is accompanied by a temperature drop. The molecules that were once speeding around inside the canister are now so low-energy that they form solid CO2, or dry ice. Dry ice is much, much colder than regular H2O ice because carbon dioxide freezes at -109 degrees Fahrenheit, while water freezes at 32 degrees. [3] Colder temperature = faster crystallization = quicker ice cream.

Now for the agitation: At the other end of Alton’s Jet Cream contraption is a typical water fire-extinguisher filled with chocolate cream. When this lever is pulled, a high-pressure spray of chocolate ensues. Between the two extinguishers are office water cooler jugs that act as the reaction chamber for the CO2 and cream. If the two levers are pulled exactly at the same time (synchronicity is very important in avoiding a catastrophic mess, stresses Alton), the blasts of cold and cream will collide in the coolers, providing the continual disturbance of the freezing process, as well as the incorporation of air, necessary to make tiny tasty ice crystals.

After plunking a scoop into a sugar cone and applying a generous coat of rainbow sprinkles, Alton hands off his creation to his volunteer assistant and asks if it is not the best ice cream he has ever had. Volunteer assistant replies that it is “So good.”

So there you have it. If you want ice cream that is “so good,” and you want a gallon of it fast, Jet Cream is the contraption for you.

About the author: Elsbeth Sites is pursuing her B.S. in Biology at UCLA. Her addiction to the Food Network has developed into a love of learning about the science behind food. Read more by Elsbeth Sites

Squishy Physics & The Molecules We Eat

The Science of Champagne Bubbles

Could Making Beer From Sewage Save Us From The Drought?
Scroll to top