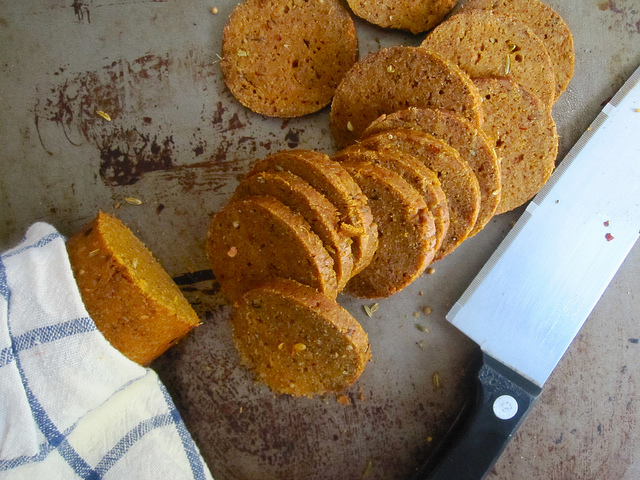 Fake meat is often associated with a tough, flavorless texture that is added to dishes to provide protein. However, fake meat is no longer just glutinous balls or tofu hidden beneath sauces. From plant protein derived meats to in vitro preparations, there is much more to synthetic meat than what meets the tongue.

Meat texture is very complex. Consider the multiple components from muscle tissue fibers, blood vessels, fat, gristle, to nerves. Each component confers a different texture and flavor profile, so replicating meat is quite a challenging process.

Texture plays a big role in determining whether a product tastes like real meat or not. For example, the satisfyingly stringy texture one gets from pulling apart chicken strips. Fortunately, food scientists have found ways to emulate the fibrous quality in fake meat using soy protein. Soy protein is initially globular, so it must be denatured, or broken down, to make it more fibrous. Soy protein is first exposed to heat, solvent, or acid, before it is reshaped with a food extruder [1]. Extrusion processes are useful as they can form meat analogs with fibrous matrices, which can then be rehydrated into meat like substances [2]. However, this process can sometimes result in a dry product. The rising company Beyond Meat has gone further and found a way to use soy flour, pea flour, carrot fiber, and gluten-free flour to emulate the fibrous quality in their fake meat with a wet extrusion process. The proteins are realigned and then locked in position by crosslinking to get a fibrous chicken imitation that is also moist and juicy [1].

The flavors of meat mostly arise during the cooking process. Maillard reactions between sugar and amino acids produce those familiar meat flavors and aromas [3]. The amino acid glutamate is of utmost importance as it activates the umami taste receptors. Real meats contain glutamate as it is found in proteins, and it is released during proteolysis that occurs during meat aging and cooking [4]. Since most fake meats do not contain glutamate, this taste can be added back with soy sauce, tomatoes, mushroom, and cheese in the form of sauces [5]. Another unique aspect of meat is its color. The myoglobin proteins found in muscle are initially red due to heme pigments, but with the added heat of cooking, protein denaturation results in a brown color associated with cooked meat. For fake meat, food colorings and spices can be used to mask the original color.

In vitro meat: your steak from a petri dish

To minimize the number of animals slaughtered, some scientists are even growing animal tissue in the lab [3]. To do this, they take a small muscle tissue sample and look for skeletal muscle satellite cells, which are essentially individual stem cells that are normally used to create new tissue in case of damage. After these satellite cells are collected, they are bathed in a nutrient serum where they can be coaxed into growing. When large enough, they are shocked with an electric current, which causes the tissue to contract and thicken, resembling small fillets of meat a couple centimeters long and a few millimeters thick [3]. While meat products generated using this process are not available at your local supermarket (or butcher), and this product is not truly “meat-less” for vegetarians or vegans, it could potentially maximize meat production by saving cows from the slaughterhouse.

Fake meat efforts are attracting big investments from Bill Gates and Silicon Valley entrepreneurs, as the demand for meat increases. In fact, population growth and a boost in meat consumption have increased the global demand for meat threefold in the last 40 years [6]. Not only does this intensify the requirements for raising livestock, but it also increases the greenhouse gas emissions emitted during processing [6]. It is no wonder that the search for the best meat-replication process continues on! Whether from an animal or plant base, synthetic meat is becoming increasingly prevalent and is not just for vegetarians and vegans anymore.