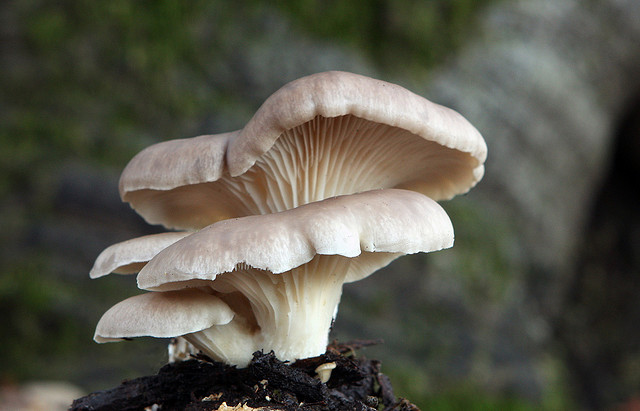 What is neither plant nor animal and whose size can span up to 1,665 football fields [1]? A mushroom! The visible part of a mushroom may seem small, but underneath the ground its’ mycelium, or threadlike reproductive organ, can cover an astounding amount of surface area.

During the recent “Mushrooms: Fungi as Food” event, undergraduate student Elsbeth Sites discussed the edible, dangerous, and innovative parts of the mushroom. Attendees left with Back to the Roots® mushroom kits to try their hand at growing oyster pearl mushrooms.

Belonging to the Fungi Kingdom, mushrooms are part of the Basidiomycetes phylum and have distinctive fruiting bodies (the part we see above ground). There are 16,000 species that make up this phylum and 10,000 are large enough to be food. However, do not get too excited and eat the mushrooms you see on the ground, as 10% of these species are poisonous and 30 types are lethal.

What contributes to a mushroom’s unique texture is the chitin that is contained within its cell walls. This substance is similar to keratin, which is found in crustacean shells. To put things in perspective, chitin from crustacean shells is often made into surgical thread because it is durable and resistant to pancreatic, bile, and urine enzyme degradation. It is also biodegradable as it breaks down naturally overtime [2]. It is no wonder that mushrooms hold up well during cooking! This amazing fungus also boasts nutritional benefit: mushrooms are the only item in the produce aisle that produce their own Vitamin D. They can turn the vitamin D precursor, ergosterol, into vitamin D2 (ergocalciferol, an isomer of ergosterol) with the help of the sun’s UVB rays [3]. In addition, shiitake mushrooms and white button mushrooms produce Interleukin-23, a cytokine that helps protect the host from gut pathogens and increases immunity and inflammatory response [4].

Of course, some mushrooms can even produce hallucinations. Those of the genus Psilocybe contain the psychoactive ingredient psilocybin, which is a seritonergically-mediated hallucinogen that can cause sensory overload. This ingredient is so potent that in a research study where 36 participants received psilocybin, 58% reported their experience to be among the five most personally meaningful experiences of their lives [5].

Mushrooms have a unique ability to decompose organic matter as well as environmental pollutants via bioremediation [6]. Recently, this ability has been extended to “The Infinity Burial Project,” which is developing a mushroom spore filled suit to decompose dead bodies [7]. Interestingly, the mushroom suit is proposed to remediate toxins in the human tissue, making it eco-friendly [7].

The small size of mushrooms is deceiving as different species have various abilities, such as production of nutrients, mind-altering substances, and/or decomposition factors. Who knows what other unique capabilities mushrooms have in store for the future!

International Variations of Yogurt: A Cultural Exploration of Milk
Scroll to top