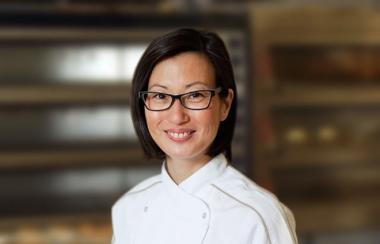 Della Gossett completed her Bachelor of Arts degree at the University of Illinois, Champaign-Urbana in Arts Education and Painting. Following her studies, she received an offer from Chicago mold-breaker Trio restaurant in Evanston, where she stayed for six years working with Chicago pastry pillar Gale Gand, and later with Executive Chef and future Restaurateur Shawn McClain.

Gosset returned to Chicago in 2001 to work at Charlie Trotter’s, the Mobil Five Star, AAA Five Diamond award-winning restaurant and winner of 10 James Beard Foundation awards. She remained there as the pastry chef for nearly a decade.

In addition to the duties as executive pastry chef for Charlie Trotter’s, Gossett regularly participated with The Charlie Trotter Excellence Program, where three times a week she and members of her team shared their work with Chicago high school or middle students, teaching youngsters about excellence and the importance of always trying to attain excellence, no matter what the pursuit.

In her role as Pastry Chef Instructor in The French Pastry School’s L’Art de la Pâtisserie, The Professional Pastry and Baking Program, Gossett is glad she can bring her many years of restaurant experience to share with her students. Gossett’s philosophy on the pastry arts involves a fidelity to the ingredients while also celebrating experimentation and creativity.(240)

Della Gossett is a member of Les Dames d’Escoffier and Women Chefs and Restaurateurs. In 2008, she was nominated for the WCR “Women Who Inspire” award.