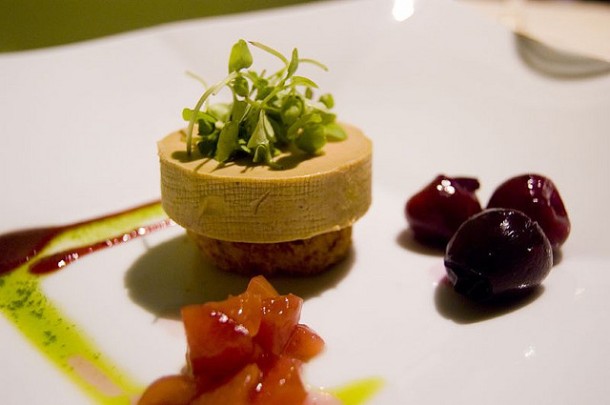 Decadent, diseased, silky, sinful. The adjectives that follow foie gras range from the disgusting to the luxurious. The fattened liver of a duck or goose polarizes people, and there seems to be no middle ground wherein a person can both enjoy foie gras and ethically question it. Because it is such a controversial food, the discourse surrounding it is often steeped in emotion, but the best way to make an informed, fact-based decision is through science. Here we will examine physiology, pathology, and a bit of genetics regarding waterfowl and foie gras in an attempt to promote overall awareness of what we eat (or don’t eat).

Foie gras is French for fatty liver, and that is exactly what it is. The liver of a bird, usually a duck or sometimes a goose, that has been force-fed to the point of having a fat, enlarged liver. The liver must weigh more than 300g for ducks, and 400g for geese to legally bear the name foie gras in France. [1] Force-feeding is typically done through a practice called gavage, wherein a long tube is inserted into the bird’s mouth and throat up to three times a day for 3-10 days. French rural code L654-27-1 states that “Foie gras belongs to the protected cultural and gastronomical heritage of France.”[2] Currently, the farming of animals to produce foie gras is banned in 22 EU nations, but not its sale or import. In California, the sale of foie gras was banned in 2004, the ban was lifted in early 2015 by a federal court, and the lifting of that ban is currently being appealed. [3] Needless to say, it’s a very complicated issue. 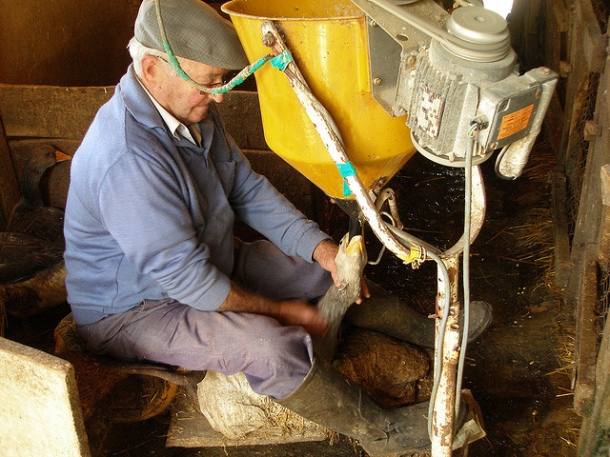 Many bird species, including ducks and geese, eat prey much wider than the diameter of their esophagus. Consequently, the inner diameter of the upper part of the esophagus is comparatively larger than in mammals. [4] Also unlike mammals, the upper esophagus is not circled by cartilaginous rings, which explains how birds swallow whole, live fish with ease. In humans, the upper esophageal sphincter is a high-pressure zone situated between the pharynx and the cervical esophagus. The sphincter is composed of muscle, cartilage, and bone, [5] and thus is much more rigid than the upper esophagus of a waterfowl. Most birds species posses an “outpouching” of the esophagus, known as the crop. It also allows the birds to store large amounts of food before sending it along to the stomach for digestion. [4]

Another important difference in human and duck anatomy is the trachea. In humans, food and air start along the same path in the mouth, then the trachea (or windpipe) branches off at the back of the throat where the epiglottis prevents food from entering the trachea and channels swallowed food along its proper route, the esophagus. Try to force something past the epiglottis, and you trigger the unpleasant pharyngeal reflex, or gag reflex. Certainly a gavage would trigger this in a human, which is one reason why images of force fed birds make us so uncomfortable. Foie producers say if the procedure is carried under proper conditions, the gavage does not block the upper respiratory tract as the birds’ tracheas and esophaguses are completely separate, [6] and thus they do not gag or feel discomfort as a human would. However, foie gras critics rebuke that this is a ridiculous excuse, and that the birds are clearly harmed by the gavage.

Ducks and geese are sometimes reported to be panting when observed in a foie-farm. But before we assume they do so because they’re in distress, we should keep in mind that like a dog, panting in birds is a thermo-regulatory reflex. [4] Humans have sudoriferous glands (sweat glands) that discharge sweat to take care of latent heat, but birds do not. They regulate body temperature by opening their beaks and panting to cool down. Researchers have examined whether other avian behaviors are indicators of distress, like avoidance behavior, elevated heart rate, or elevated cortisol (stress hormone) levels. They report that force-feeding does not stress the birds more than typical capture and handling does. [1] [Side note: Most of this research was conducted by the same group of scientists from the French National Institute for Agricultural Research, so it would be helpful to have experiments performed by more organizations.] 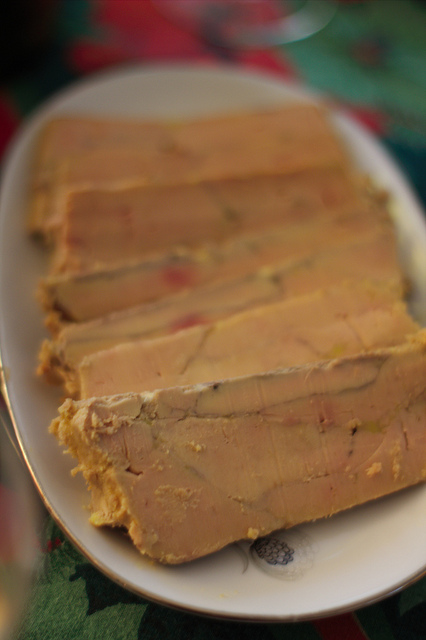 In mammals, hepatic steatosis (fatty liver) is a pathological condition. Human fatty liver occurs when there is an imbalance of fat uptake and export in the liver, most often caused by alcoholism, malnutrition, obesity, or diabetes. On its own, hepatic steatosis is not harmful and can be reversed, but if not addressed with dietary and lifestyle change it can develop into cirrhosis, wherein the healthy liver tissue is replaced by scar tissue, or necrosis (tissue death). Indeed, foie gras in a human is a disease. [7]

Certain metabolic adaptations in migratory birds and fish cause a natural hepatic steatosis, and proponents of foie gras use this observation to argue that the condition is not pathological in those species. These animals must compile large energy stores for their migrations, and they do so by ingesting carbohydrates and storing the energy as fat, a process called lipogenesis. [8] Foie producers posit that they are simply exploiting the incredible lipogenetic abilities of the fowl liver. The human liver does no more than 30% of our entire bodies’ lipogenesis, as our adipose tissue carries most of the workload. [9] By contrast, the avian liver performs the vast majority of their lipogenesis, up to 96% of it in some species. [10] To further their argument that their birds are not diseased, foie farmers assert that it is in their best interest to avoid producing diseased livers, as they are of no commercial value. 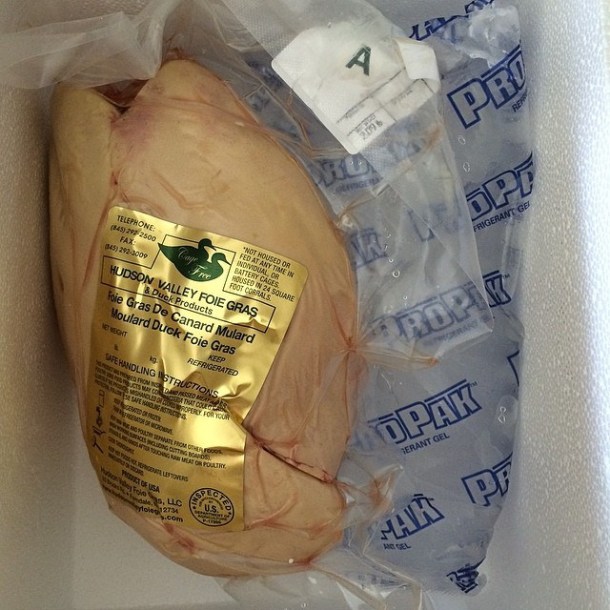 Genetics of the Muscovy Duck

In addition to the anatomical and physiological aspects of waterfowl that may make the production of foie gras seem less cruel, a look into the breed may provide further insight. Foie gras is made from the liver of the Moulard duck, which is the product of a female Pekin artificially inseminated with the sperm of a male Muscovy duck. [1]The Moulard, or “mule duck” genotype is not present in the wild, and like other hybrid species, it is sterile. Therefore, the animals themselves cannot breed more baby Moulards.

Muscovies are non-migratory, [11] so unlike migratory species, in natural settings they do not gorge themselves to put on extra fat to carry them through long periods of physical exertion with no breaks to replenish energy. It might seem like they would be a poor choice for duck farming, but they are prized for their well-flavored, lean meat.

Pekin ducks on the other hand have many of the characteristics of migratory species. They are naturally gregarious and clump themselves together whether or not they have space to roam. [11] Years of breeding have made them very plump and small-winged, and thus they no longer migrate. However, their inner organs and basic metabolism still maintain characteristics of migratory waterfowl. The moulard thus exhibits the more desirable behavioral features of the two species. Like muscovies, they have no migratory instincts, so they are easy to farm-raise. But they retain all of the anatomy and metabolism of Pekins that naturally make them want to gorge and store energy as fat. 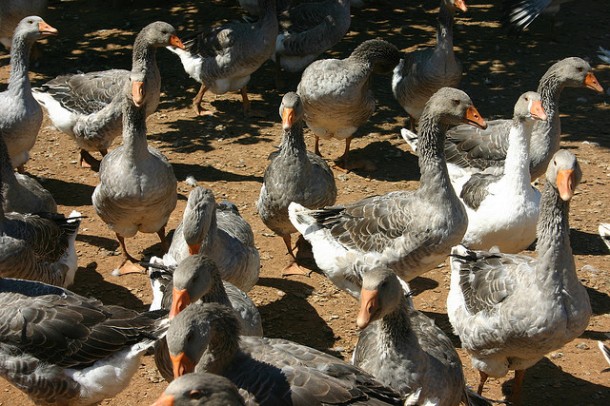 In this physiological context, gavage and foie gras might not be as tortuous as some imagine it to be. Even with this information, some people may still feel uncomfortable with the idea of force-feeding, and that is perfectly reasonable. If we want to eat foie gras entirely guilt-free, perhaps we should support the production of “humane” foie gras, where the animal is left to gorge on its own as if it were preparing for migration. Examining foie gras through a scientific lens teaches us to evaluate the animal body for its natural capabilities, but science does not always give us clear answers as to what is morally right. Regarding foie gras, the jury is literally still out.