On foraging for local ingredients in your college dormitory…

Our Judge’s Favorite winner of the 2013 Science of Pie event showed how beer and vodka affect pie crust color and texture. But they weren’t the only students who experimented with alcohol in their pies. Two other teams—Team Super Rum and the Beam Team—also used alcohol to create flaky, tender crusts. The Beam Team even added Kentucky bourbon whiskey (Jim Beam, of course) to their pie filling for an extra punch of flavor.

So why all the alcohol? According to the Beam Team:

“Our group was inspired by Alex Atala’s process of going out into the Amazon Forest and finding local plants to use as ingredients. As college students, we decided that our ‘native’ ingredient is alcohol since it is easily found in abundant quantities all around us, so we used our two favorite types of hard alcohol: whiskey and vodka.”

There’s another (more scientific) reason for boozing up a pie crust: alcohol creates a more tender, flaky crust than can be easily achieved with water alone. This happens because alcohol and water have very different effects on the formation of springy gluten networks in pie dough.

Gluten develops when two wheat proteins in flour, glutenin and gliadin, are mixed with water. Because parts of these proteins do not like to interact with water, the proteins begin to stick to each other much in the same way oil droplets come together when suspended in water. As a flour-water dough is mixed, the glutenin and gliadin molecules interact to form an extensive elastic network [1].

While gluten networks are great for chewy bread dough, they are less than ideal for flaky, tender pie crust. An ideal pie dough has as just enough gluten to hold everything in the dough together. And while gluten development can be minimized by adding only scant amounts of water and handling the dough as little as possible, this is easier said than done.

A more practical solution is to replace some of the water with a liquid that does not promote gluten formation. Unlike water, alcohol inhibits gluten formation. By interacting with the gluten proteins, alcohol molecules limit their ability to stick to each other and form springy networks [1]. Using alcohol in the place of water allows more liquid to be added to the dough while still restricting gluten formation. This results in a softer, more pliable dough that becomes tender and flaky when baked.

Team Super Rum serves their pie and presents their work at the Science of Pie even (left). Test pies made with rum pie crust (top right) or bourbon apple filling (bottom right).

Like the recipe below, the Beam Team paired a vodka pie crust with a decadent bourbon and apple filling. Although vodka is typically used for its subtle flavor, any type of alcohol will prevent gluten formation. As their name suggests, Team Super Rum used rum instead of vodka to create a flaky and uniquely flavored crust. And we bet there are many more delicious possibilities in the realm of alcohol-based pie crusts. If you try this recipe with something other than vodka, share your new pie crust concoction with us in the comments below!

Process 1 1/2 cups flour, salt, and sugar in a food processor until combined, about 2 one-second pulses. Add butter and shortening and process until homogeneous dough just starts to collect in uneven clumps, about 15 seconds (dough will resemble cottage cheese curds and there should be no uncoated flour). Scrape bowl with rubber spatula and redistribute dough evenly around processor blade. Add remaining cup flour and pulse until mixture is evenly distributed around bowl and mass of dough has been broken up, 4 to 6 quick pulses. Empty mixture into medium bowl.

Sprinkle vodka and water over mixture. With rubber spatula, use folding motion to mix, pressing down on dough until dough is slightly tacky and sticks together. Divide dough into two even balls and flatten each into 4-inch disk. Wrap each in plastic wrap and refrigerate at least 45 minutes or up to 2 days.

In a 4 quart saucepan, whisk together sugar, flour, cinnamon, nutmeg, and salt. Whisk in bourbon whiskey and lemon juice until evenly blended. Cook over medium heat, whisking frequently until the mixture boils and thickens slightly. Add apples and stir until evenly coated. Continue cooking, stirring continuously, for 3 minutes. Set aside to cool, stirring once or twice for 20 minutes.

Bake 25 minutes at 425. Reduce temperature to 350 and bake 45 minutes longer or until crust is brown and juices are bubbling.

Serve warm or chilled with whipped cream or ice cream.

Amy Rowat dissects the science of pie for the New York Times, while Harold McGee explains how vodka makes a light, crispy batter for frying fish. Apparently pie crust isn’t the only dough that benefits from a little alcohol! END_OF_DOCUMENT_TOKEN_TO_BE_REPLACED 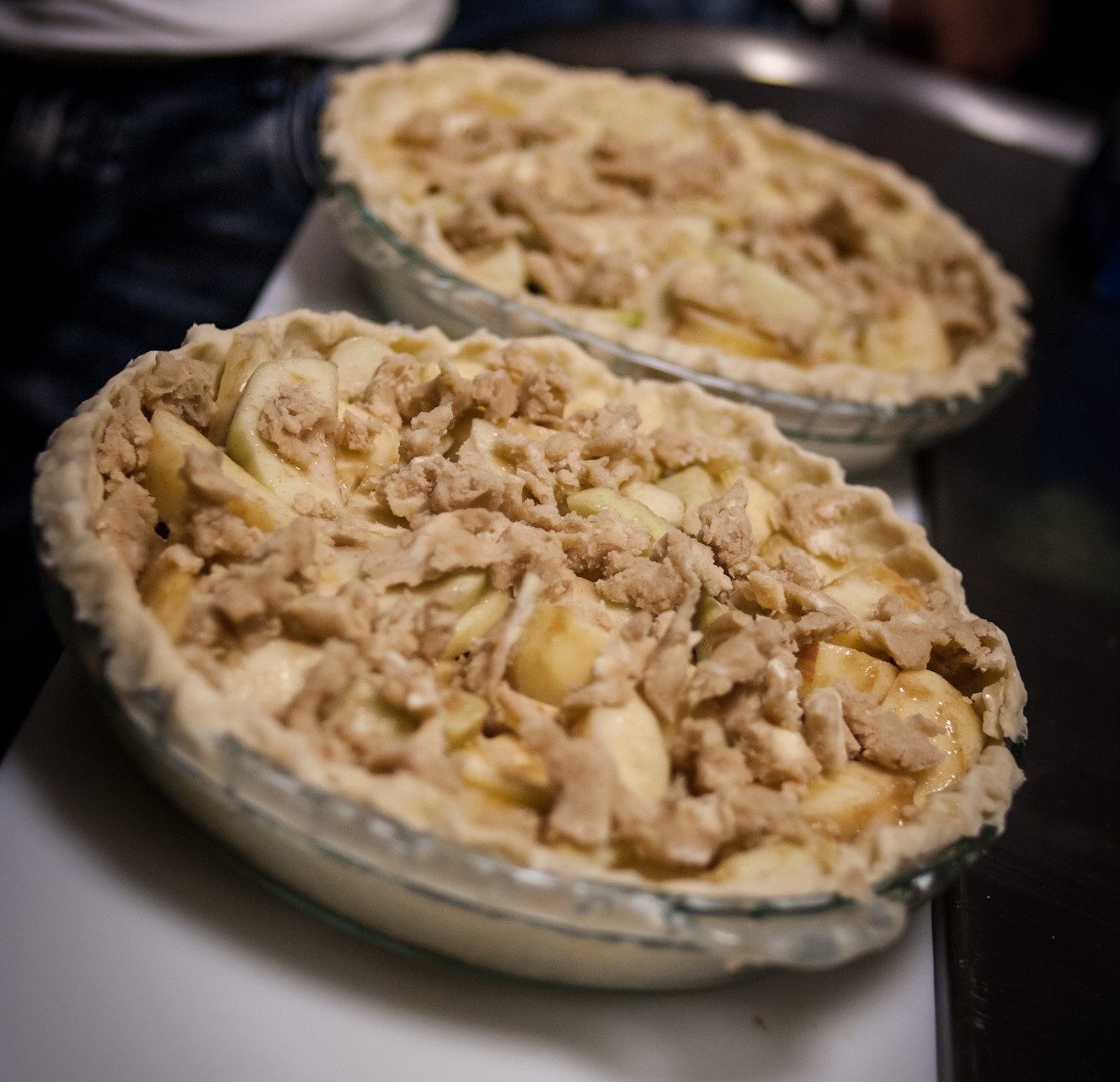 Seeking to perfect pie crust texture, team Aπ3 experimented with different liquids that may impede the formation of gluten protein networks. Gluten gives structure and stability to pie dough, but can also make pie dough dense and tough when over-developed. The team examined the porousness, density, and browning of pie crusts prepared with their three different liquids compared to water and concluded that vodka creates the flakiest pie crust.

To prepare the crust, mix the dry ingredients. Cut in the cubes of butter until the butter forms approximately pea-sized pieces. Add water and vodka one tablespoon at a time, alternating the liquids. Only add liquid until the dough starts to come together and can be formed into a ball. Chill dough for at least 30 min. Roll out the dough and press into a pie pan to form the bottom crust.